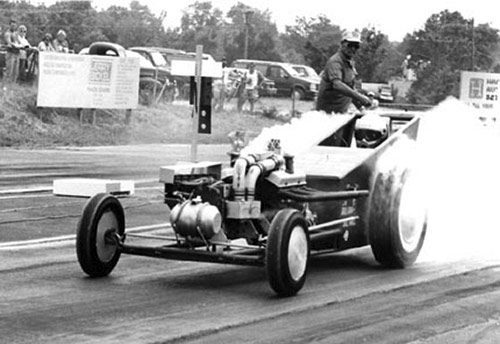 In 1954 Paul Stevens started a racing Legacy that will span more than six decades. As you can see we still have the 1956 built Little Puffer, A hand built, one of a kind gas dragster that set records in the Midwest.

1960 was the beginning of Nitro racing for our family. Paul built our first hemi powered dragster and went to Bakersfield for the March meet turning a 187.10 mph run, besting most of the West coast cars.

There were many cars and classes to come for our family, Gas and Fuel Altereds, Jr Fuel Dragsters and Funny Cars.

In 2003 after the passing of Paul, Dave with the help of his little brother Rex spear headed a new Top Fuel Dragster operation. Running the IHRA circuit and select NHRA National Events, finishing in the top ten in IHRA the very first year. With Tim Gibson at the wheel of the dragster the team ran a best of 4.68 at 310 mph.

With the passing of Dave the team just couldn't keep pace.

For the 2018 season Rex is assembling a nostalgia Competition Coupe, The Guardian, a full track tire smoker. Rex a seasoned driver in his own right, driving Fuel Funny Cars, Fuel Dragsters and most notably Dawson’s Demon 1934 Ford Fuel Altered. Rex will be using parts from the Top Fueler and expects to be in the running for the IHRA World Championship.